Chennai has been known for its architectural marvels. Our collective history and the different merchants and invaders like the Portuguese, Dutch, French, and British have contributed to the architecture that our country in general and Chennai in particular. Today, many photographers are taking to the streets to capture the beautiful stories that our streets showcase and narrate. Often, these photographers capture based on themes and even go as far as creating coffee table books and such for the themes.

Famous Churches in Chennai for Photography 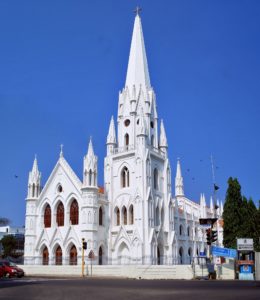 This church was built originally in the 16th century by the Portuguese. However, eventually, it was rebuilt in 1863 by the British. It is a basilica church in Chennai. It is considered an important religious site. The church is built in the Neo-gothic style and has wonderful architecture inside out. It is easily one of the more beautiful churches in the world and one of the best churches in Chennai. St. Thomas is one of the 12 apostles of Christ and this is built in his honor. The church also has a museum.

Built-in 1815, this church is considered an architectural marvel. Its grandeur was funded, interestingly enough, using a lottery fund. The stained glasses on the walls are a treat to see in itself, when sunlight passes through them it lights up the entire cathedral to give a beautiful view. The altar of the church lights up in all its glory.

The St Mary’s church was built in 1679. It was built by the East India Company in India and is considered one of the first Anglican churches built by them. This is a church that has a fantastic structure with walls thick to deal with explosives. The interior of this church is beautiful and breathtaking to experience. This church was built in the memory of St. Thomas who is believed to be one of the 12 Christ Apostles. He passed away in India in 72 AD. Apart from a beautiful structure in memory it also has a host of paintings that show the different and significant parts and journeys of the Apostle’s life. 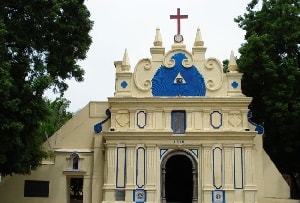 St. Andrews is also called ‘The Kirk’. It is known as one of the oldest churches constructed during the British Raj and is also considered a very expensive structure built during those times. The Scottish community built the church and therefore got the name called ‘The Kirk’, meaning ‘The Church’ in Scottish. The church’s design has a Neoclassical and Palladian influence. 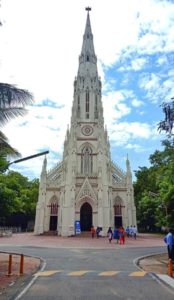 This beautiful church was commissioned by a French clergyman, and built by a mason of Indian origin. It is believed the architect who built this church’s architect had no formal education in architecture or civil engineering. The Christ the King Church is built based on Gothic architecture. With beautiful stained glass, this breathtaking church is located bang in the Loyola College campus. This invariably attracts a lot of students from the college.

Annai Velankanni Church is located on Elliot’s beach, one of the more famous beaches in Chennai. It is dedicated to Madonna, the Lady of Health for Christians. Christians, especially with issues relating to health come to this Church to seek blessings. Devotees and believers can offer candles shaped differently for different kinds of ailments that they suffer from. Though considered a smaller church in comparison to the others, it does not disappoint in terms of architecture and sculptures of Jesus on the walls. 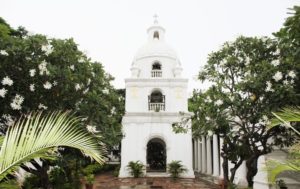 This is a fairly small structure, that is packed with history. Built-in 1712, this church was built by the Armenian merchants. It is located in a busy street and is known for the church bells it flaunts. It is believed these are some of the heaviest church bells in Chennai. The caretakers of this church ring these bells, every Sunday sharp at 9.30 in the morning. This church is a reminder of the Armenian community that lived in Chennai. 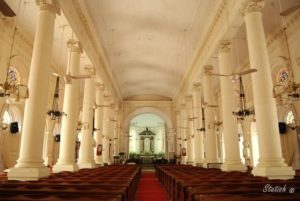 Descanso church was constructed in the 17th century. It is considered a cultural and religious center, which is built in the place where St Thomas served people. St Thomas was one of the 12 Apostles of Jesus. It is a beautiful structure that celebrates love and gives people access throughout the day.

This St. Patrick’s Cathedral is considered to have supernatural powers. Many devotees come to this place to be cured of different kinds of illnesses, with people citing examples of how they were cured after their visit. This can easily be one of the most popular and visited churches in Chennai. The structure and beauty are breathtaking and get enhanced multifold during Christmas each year.

Based on the architecture of Portugues designs, the Luz Church was built in 1516 by the Portuguese. This church is also called ‘Church of Our Lady of Light’. The altar has baroque ornaments and arches that are based on gothic architecture. There is much folklore connected to this church, but one thing that is relevant to this church is every year they take out a procession on August 15th for the “Feast of Our Lady of Light”.

This church is one of the oldest churches in Chennai. Wesley church was built by the Wesleyan Mission in 1905 and was named after John Wesley (the founder of the Methodist Movement). The church’s structure was built using Gothic architectural principles. It is a church for the Protestant sect of Christians. It is currently under the dominion of the Diocese of Madras of the Church of South India.

St. Peter’s Church is one of the Roman Catholic Churches in Chennai and is one of the oldest in Royapuram. It was built in 1829, using Gothic architecture principles. The altar is decorated with catholic images. This church is dedicated to the Roman Catholic sect of Christianity. This has a host of beautiful plaques of Jesus Christ and other saints. This church celebrates Christmas for 8 days, between the 24th of December to the 2nd of January. 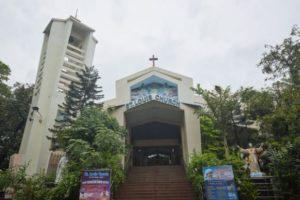 St. Luke’s Church is a beautiful structure that has mesmerizing architecture. This church is spacious and well built with eye capturing paintings and colored glasses. On 27th February 1976, the foundation stone for the construction of the church was laid.

Photographers have the ability to tell stories through images, the best of them do not just capture the moment but can also narrate within that still what happened before it became such. A good photographer is a person with a keen eye, and the churches around Chennai make for the perfect muse.