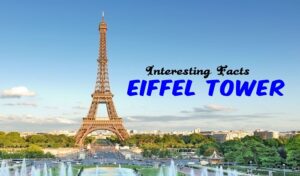 Whenever anyone pictures the signature form of the Eiffel Tower, their mind instantly goes to Paris. I’m no different. When I visited the City of Lights, I was mesmerized by the Tower’s beauty. It’s almost as if it’s a reflex action! This symbolic tower goes by many monikers. The engineering fraternity calls it a testament to the marvels of modern architecture and engineering. Parisiens call it their claim to fame in the world. To me, however, the Eiffel Tower is a monument to the longstanding culture and joie de vivre of its city. When I visited Paris and the Eiffel Tower, I did a little digging on its history and unearthed some interesting facts. The prolific journey this tower has seen has many iconic stories and interesting facts about Eiffel Tower itself along the way. Some of them genuinely blew my mind!

Let’s rewind the clock to the inception of the Eiffel Tower’s concept. It’s the late 19th century in Paris, and the one-hundredth anniversary of the French Revolution is nigh. As a monument to this milestone, two engineers at the Compagnie des Etablissements Eiffel came up with a structural plan for a tower with four corners at the base and rising in a cupola.

When Maurice Koechlin and Emile Nougier stepped forth and showed Gustave Eiffel their plans, he was indifferent. Only after a couple of revisions did he greenlight the project, following which he purchased the rights and patent for the proto-building.
There’s an interesting fact about the Eiffel Tower for you, even before the building came to existence!

– Gustave Eiffel was not the architect of the Tower. He’s just the person who signed off on the paperwork. His company funded and constructed the tower, and as we know, they secured the patent for it. He who brings the game keeps the name!

The Tower And Its People

When the Parisiens caught word about this brand-new tower, they weren’t sure what to make of it. Architecture enthusiasts and art purists launched scathing attacks on the building, calling it a blemish on Paris’s sublime architecture. The general public, however, were divided on their opinions. Some decided to give the Eiffel Tower the benefit of the doubt. The rest, as they say, is history!

To his credit, Gustave Eiffel stood his ground despite all the backlash. He likened his creation to the Pyramids of Giza, in the sense that it would gain popularity in the years to come. Well, he wasn’t wrong, was he? During the construction, there’s something Gustave Eiffel ordered for the Tower that remains to this day. Any guesses as to what it is?

– In a show of solidarity for the scientific community, Eiffel had the names of 72 scientists and engineers whose work was instrumental to the project, engraved on the tower. Today, you can still see those names on the tower face, spelled out in golden coloring. Sadly, there is not even a single woman’s name up there, even though their contributions are notable. Each name has a story behind it as an interesting fact about the Eiffel Tower!

Like all other towers in the world, arguably the most prominent statistic of the monument is its height. Let’s look into that statistic next!

It’s indeed no surprise that the Eiffel Tower is the tallest building in Paris. For reference, it’s about as tall as a skyscraper with eighty floors. In today’s world, there exist far taller buildings. In the 19th century, though, the Eiffel Tower dared to aim higher than the whole world.

– The original name of the tower was the 300-meter tower. At the onset, it was never meant to be a permanent fixture in Paris’ skyline. The engineers built the tower using novel techniques (at the time) and raised it to 300 meters. No other skyscraper in the world had managed this feat. It upstaged the Washington Monument to become the world’s tallest human-made construction. Forty-one years later, the Chrysler Building in New York took on that mantle. How’s that for a tall & interesting fact about the Eiffel Tower!

We’ve spoken about height. What about the time?

The Tall Test Of Time

Right from the get-go, speed was of the essence during the construction phase. Eiffel wanted the monument to be an ironclad reminder of the potential of modern engineering. Today, we look back on it and see just that. How so?

– The Eiffel Tower was built in just over two years and two months. That might not sound like much today, but what makes it an interesting fact about the Eiffel Tower is the period. Bear in mind that this monument was constructed in the 19th century, even before both World Wars! The technology was nowhere near the potential it has today. In that regard, it’s quite impressive!

Let’s add some color to these proceedings.

The Heights of Colour

Based on the images you see, you probably think the Eiffel Tower is some shade of brownish-grey. For one thing, the Eiffel Tower is constructed with steel. Rusting is a genuine threat, so the tower gets repainted once every seven years. Here’s the catch, though.

The Experience: Interesting Facts About The Eiffel Tower

The Eiffel Tower is the most popular paid-visit monument in the world. Its popularity is so sky-high that the tourist spot has been operating at full capacity every single day in the recent past.

The tower becomes a spellbinding spectacle at night, thanks to the illumination of its frame. Fun fact: the artwork created by the lights is copyrighted as a work of art. However, it’s perfectly acceptable to snap a pic for your album!

The Eiffel Tower is one of the most identifiable tourist hotspots in the world. If you’re travelling to Europe, make sure you get to experience this monument’s beauty in person! It’s an experience you’ll cherish forever, so take your camera along!

NEXT : Interesting Facts About Porto

Practical Guide For Every Traveller