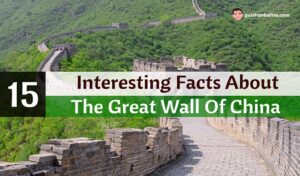 Across centuries, humanity has constructed some awe-inspiring monuments the world over. These magnificent edifices stand as a testament to the advancement of human civilization over the ages. In short, they are a link to the past. Today, these monuments are cultural emblems of the countries they occupy, easily recognizable even by their silhouettes. Through this article, we’re going to visit one of the most majestic tourist attractions in the world. Any guesses? If you predicted that you’re going to learn about the Interesting Facts About The Great Wall Of China through this post, you’re right! Ready to travel down this human-made marvel?

Let’s kick things off with some fundamental facts about the Great Wall Of China.

– The Wall traces its origins as far back as 7 BC, with generations of Chinese royal dynasties building and extending the wall to its present length.

– Another interesting fact about the Great Wall of China is that it is around 21,196 km in length. Bear in mind that this is just the known portion of the Wall!

– At first glance, the monument seems just like an ancient wall. History tells a different tale, as the wall is an old military defense system. In terms of scale and implementation, the wall remains one of the most incredible feats of architecture known to man.

– The Great Wall Of China has been around for around 2,300 years. Time has taken its toll on the structure, and restoration efforts are currently in full swing to bring the Wall back to its former glory.

– Owing to the Wall’s great length, the Great Wall of China’s endpoint is debated to this day. However, the endpoint of the Great Wall is generally considered to be Jiayuguan Pass, with the Chinese referring to it as the Stairway To Heaven.

Now that we’ve got the fast facts out of the way let’s build-up to some relatively unknown fact bytes about the monument in China. Brace yourself, because the Wall has a lot of stories to tell!

The Winding Tale – Interesting Facts About The Great Wall of China

1. The Great Wall of China is NOT visible from space.

Unless you use some form of assisted imagery (such as radar), you won’t be able to discern the wall’s distinct structure from orbit. This is a frequent myth that does the rounds among tourists worldwide. Now you know the truth!

2. Hundreds of thousands of people lost their lives in the effort to build this wall

3. A Tasty Fact About The Great Wall Of China

In some locations of the wall, processed rice flour was used to set the brick elements of the wall together. Specific segments of the wall had a focus on being constructed organically, with pressed earth being used to hold the structure intact.

4. Wall With A Purpose

Contrary to popular belief, the Great Wall Of China wasn’t just built for pomp. The Wall was a defence line, punctuated by fortified watchtowers all through its route. To this day, those watchtowers offer a breathtaking view of the surrounding area.

One interesting fact about the Great Wall of China is that no one has even a rough estimate of how much it cost to build! The Wall itself is so ancient and dates so far back that the financials are relatively obscure. By my estimation, I’m fairly sure it would have cost close to 100 billion dollars, at the very least!

6. The Folklore of The Great Wall

The tales surrounding the Great Wall of China are as extensive as the Wall itself. One particular fable stands out over the rest. The story of Meng Jiangnu is genuinely tragic. Having lost her husband from the exertions of building the wall, she wept inconsolably. She cried so much that the wall eroded and revealed her dead husband’s skeleton buried beneath the wall. A chilling story, isn’t it?

7. The Question Of Names

From the start to the Great Wall Of China’s endpoint, the locals have a name for the great monument. In Chinese, the wall is referred to as “The Long Wall”. Sounds anticlimactic, right? However, the name does justice to its stature!

Have you ever wondered how so many workers were available to construct the Great Wall of China? The royal dynasties of China had a simple solution for this workforce shortage. They assigned convicted criminals to do the heavy lifting at the construction sites, thereby cutting down on labour costs. Punishment fits the crime!

Remember when we mentioned the fact about the Great Wall of China’s erosion? Well, part of the problem is that people from centuries past used to steal bricks and building materials from portions of the wall to build their own homes. In today’s day and age, defacing the Wall in any way is a punishable offense.

If you visit the wall, you’ll notice that some sections are broader and better paved than some others. This design decision was to account for soldiers patrolling the Wall on horseback. The horses needed room to manoeuvre, so the Wall had to accommodate that specification.

An interesting fact about the Great Wall of China is that most of it are still unearthed by man. Even as recently as 2012, archaeologists discovered a new section of the Wall, still intact from the ravages of time.

Remember the tale of Meng Jiangnu from before? Her husband wasn’t the only one who succumbed from the exertion of the building. One of the most popular myths is that the Wall is a long and winding cemetery. Rest assured, though, this isn’t true!

From the origin to the endpoint of the Great Wall of China, there are specific segments that are perfect for hiking. The Jiankou section in particular arcs up and down, with cobblestones paving the way ahead!

The Great Wall of China wasn’t that great at protecting from invasions, significantly as the walls frayed over time. The fortresses, on the other hand, were formidable strongholds.

Believe it or not, the Great Wall of China didn’t gain much traction on the tourist side of things until the late 1970s and early 1980s. From there, there’s been no looking back!

A Wall With Many Stories

True to its title, there are myriad exciting facts about the Great Wall of China. To get the real experience, however, you have to travel there and take in this human-made marvel firsthand! Have you visited this monument? Let us know in the comments below!

FAQs – Interesting Facts About The Great Wall Of China

5) Why was the Great Wall built?
– One of the interesting facts about the Great Wall of China is that it was built for military purposes and for guarding the Silk Road.