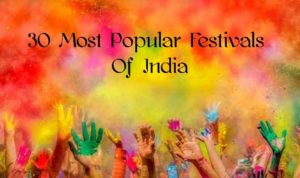 There are many festivals that we celebrate in India. Like our cultures, our festivals are also diverse in nature and varied. We have the luxury to choose what we want to celebrate, and in which state. That is what makes our country unique. In fact, most Indians are so entwined that we do not fall short of celebrating anything. Here is a list of just some of the popular Indian festivals that you would want to know a little about and maybe at least experience for sure when you are here.

This has to be unique to our lives. This certainly is one of those festivals that makes brothers and sisters feel special. It is a tradition where the sister ties a ‘rakhi’ to the brother and typically receives gifts or cash in return. It is about the celebration of the brother-sister relationship and many people have adapted it though it may have not originally been part of their culture.

Holi also called the ‘festival of color’ is something that one must experience at least once in your life. This is when the colors come out and people celebrate them by throwing color at each other. It is the celebration of the winning of good over evil and is celebrated across the country. If you are playing Holi with your friends and family, you are sure to have a lot of fun.

The festival of lights is one of the famous festivals of India. This is a festival where most people light Diyas in their house and burst crackers. Typically celebrated between mid-October and mid-November, this festival brings people together to celebrate light over darkness. It is also associated with Goddess Lakshmi, the goddess of wealth and many also pray to the goddess during that day for wealth and prosperity.

Typically celebrated in August or September this is a festival of purifying your soul, and is celebrated over 8-10 days. The five main vows are celebrated during this time namely Satya (Truth), Ahiṃsā (Non-violence), Brahmacharya (Chastity), Asteya (Non-stealing), and Aparigraha (Non-possession). The last day is when you ask for forgiveness by saying ‘michhami dukkadam’ to all living beings.

The Christmas tree in the house decorated to individual tastes and the stars across the cities will indicate to you the arrival of Christmas. The celebration of the birth of Christ. Though Christmas is celebrated on 25th December, many celebrate it before and after that day. Santa Claus and his gifts are important and an indicator that we were well behaved through most of the year if not all.

This is an interesting festival period that is celebrated in different parts of the country differently, but celebrated non the less. If you go east to Bengal, you will witness the burning of Ravana with 10 heads, and pandals of Goddess Durga. If you go west you see greatly dressed people doing the Garba and dandiya and having a party and fasting. If you come down south you will see houses decked up with Golu and sharing sweets and spicy treats.

Ganesh Chaturthi is a celebration of Lord Ganapathi’s arrival to the world from Kailasha. One of the loudest celebrations may happen in Maharashtra which is the host to the famous Siddhivinayak temple. But other states do not fall behind. Come Ganesh Chaturthi, most people have their own version of him at their home and visit other’s that have them. Also, the visarjan that happens is a big event.

Celebrating the harvest and other blessings of the year that has passed is what Thanksgiving is all about. Friends and families come to share the fruit of what the universe has given. Without a doubt, it is one of those celebrations that give you a reason to reconnect and revisit people that matter to you and share a meal.

A beautiful festival celebrated across the state and multiple parts of the country. It is a festival that is believed to celebrate King Mahabali. It is said that his spirit enters the state during this day. Most households during this day create a rangoli with fresh flowers called pookalam.

This is considered to be Lord Budha’s birthday that falls on Purnima or a full moon day and falls usually between April and May. Gautham Budh or Gauthama Buddha was formerly called Prince Siddhartha Gautama. It is celebrated as part of Vesak, a celebration of important days in Buddha’s life. Lighting candles and incense sticks are all part of the tradition on this day.

This festival is celebrated for the resurrection of Jesus Christ. It typically is celebrated in April. It is an occasion when families and friends come together to share a meal, and exchange gifts as well. Kids particularly get excited by this because of the tradition of Easter eggs. Where the easter bunny delivers chocolates and sweets to them.

The harvest festival called Pongal is celebrated in January. It is celebrated across days and one of the main dishes that are made during this season is Pongal (a rice and pulses dish seasoned with Indian spices). Many households, especially in the south of India make the dish called Ven Pongal and sweet Pongal during this time. It is a time to visit family and friends and celebrate it.

This is a particularly famous Assamese festival in the northeastern part of India. It falls in April typically and is considered the beginning of a new year for the Assamese. It is celebrated over seven days with unique reasons for each of those days. It is all about dance, celebration, color, and more. The Bihu dance is something not to be missed.

A celebration in the Leh-Ladakh region, it marks the winning of good over evil. It is all about colour, fun, and frolic. It is famous for the Chham dance, the devil dance, handicraft, and Chang (a special local drink). It is typically celebrated in June and July for over a few days.

Typically celebrated around February, it is a festival that is celebrated to thank the gods and the beginning of a new year in the Himalayan region. It is celebrated for 3 days but there is every chance that the merry of the festival can go on for up to 15 days. It is all about colour and frolic and togetherness with family and friends.

A famous festival in Arunachal marking the harvest. It is an agricultural festival. People come together, play sports, dress up colourfully and also perform specific folk dances in celebration. They feast together and give each other cucumber (Dree Taku) and drink a drink called Dree O which is a beer made from rice or millet.

This festival celebrates the birth of Mahavir who was originally called Vardhamana. This festival is celebrated with fasting and wishing each other and reaching out to the community. It also includes chanting of hymns with friends and family. It typically falls between March and April.

One of the most important festivals to the people of Rajasthan, this is the celebration of the arrival of spring and harvest amongst other things. It is typically celebrated between March or April. They go on for anywhere between 16 – 18 days. They hold fairs, get together with family and friends, decorate their hands with Mehendi and wear colourful clothes.

A sow seeding festival in Manipur, this is a celebration of harvest and growth. This is celebrated in February and brings people together to celebrate the fact that their land is fertile and will help them in their life. They also showcase their rich tradition to show they still have it and can pass it down to the different generations as they continue to do.

Also called Vaisakhi, it is a festival that is celebrated in April. People celebrate it for the Khalsa Panth’s formation and is considered the beginning of the solar new year. Typically, they have fairs and parades to celebrate even the harvest season and become a cause of great celebration on the streets.

This festival is celebrated in Sikkim to introduce the harvest season. Celebrated in the northeast as most festivals in India there is a lot of fun and frolic surrounding it. They bring people together to dance to folk dance tunes and have different kinds of competitions. They have a grand feast and eat locally brewed wine as part of their celebrations to welcome prosperity.

Celebrating the Sun God for the bounty that is given to the world. It is a festival that is dedicated to the power of the sun. The light that it brings to the world and life it helps to grow. Though mostly concentrated in states like Uttrakhand, Bihar, and Uttar Pradesh it is something enjoyed across the country. It is typically celebrated between October and November.

This is considered a pilgrimage that has a cycle of 12 years and across different river backs. The locations include Allahabad, Haridwar, Nashik, and Ujjain. People gather in these different cities at the riversides to take a dip in the rivers. Each of these places is unique in food, culture, and the kind of fairs they organize. People gather here to ask for forgiveness for their sins. The gathering in numbers, the colors, and the experiences are somethings you should experience at least once in a lifetime.

A famous sowing festival in Nagaland. A beautiful festival that acts as a stress buster after the locals have completed sowing. It is a festival all created to help farmers to have and get access to some recreation and to ensure they can rest and hopefully see their farms yield returns. Typically celebrated in May it is a wonderful colourful festival including song and dance.

This is a festival celebrated mostly in states like Maharashtra and Goa, during springtime. It is a festival that marks the beginning of the year. It also has different names in different parts of the country including Yugadi, Ugadi, Cheti Chand, Samvatsar Padvo, and Navreh. All of these have one thing in common, meeting with your family and friends and looking forward to a new year.

These are just some of the list of famous festivals in India. The celebrations we have are not just limited to these. That is the core of our diverse cultures and states and places. We celebrate them all and are proud of each one of them. We all celebrate different things and sometimes the same things. But the deal is that we love to celebrate our diversity. Certainly, whichever time you travel to India, the one thing you can certainly celebrate is India.