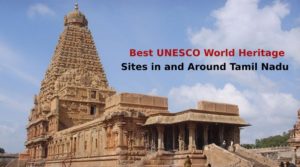 Did you know there are a whopping 38 UNESCO World Heritage Sites in India? A country that is rich in culture, natural wonder, and architectural marvel should make each of us proud. You will come across many UNESCO world heritage sites in Tamil Nadu, as you travel across this particular state of India. Of course, there are historical places in Tamil Nadu that are yet to be declared as a UNESCO site, but one must experience the essence behind these sites. Here are 16 Best UNESCO World Heritage Sites in and around Tamil Nadu that should be part of your bucket list when traveling the South of India.

Best UNESCO World Heritage Sites in and around Tamil Nadu

In the year 1987 is when it got the recognition of being a UNESCO world heritage site. The structure is known for its beauty and is dedicated to Lord Shiva. It is over 1000 years old and is said to have the tallest temple tower in the world. It is built by the Cholas. The Brihadeeswarar temple is said to be the first built on granite.

Declared a heritage site in 2004, this is a temple that you must see for the architecture. It is one of the world heritage sites in Tamilnadu that you will not regret to see. Built by the Chola dynasty, it is certainly a treat to the eyes and dedicated to Lord Shiva. This beautiful temple near Kumbakonam has a rich history and interesting stories associated with it.

The beautiful town of Ariyalur is known for the Gangaikonda Cholapuram temple that was built by Chola Dynasty in 1023 by Rajendra Chola I. The temple is the living incarnation of the heroism of the Tamils who hoisted the Tiger Flag of Cholas on the banks of the River Ganges. The heritage site is said to have been Chola’s capital for around 250 years. It was recognized as one of the best UNESCO world heritage in Tamilnadu.

This temple township has many monuments that can take your breath away. Carved out of rocks, most of these monuments have joined the prestigious UNESCO World Heritage list in 1984. It has Rathas, Mandapas, Arjuna’s Penance, Bhagiratha’s Penance, and more that are a must-see at least once in a lifetime. It is believed to have been built in the 7th and 8th centuries by the Pallava kings.

Hampi also called Hampe is part of the UNESCO world sites near TamilNadu. It is believed to be the capital city of the Vijaynagar empire during the 14th century. It is one of the most popular tourist places in Karnataka because of the excellent workmanship of these temples and monuments hold. The architecture in Hampi had a rich history that can be telling the story of both prosperity and the powerful Vijayanagar Empire.

Considered one of the recognized places as a UNESCO World Heritage in 1987. This place has a Jain along with Hindu temples and architectural structures are places where the north meets the South. This is a perfect example of the inclusivity of the place in itself. Many dynasties have contributed alike to this beautiful place that has got its recognition.

The Western Ghats as an area has multiple places that are UNESCO sights. It cannot be attributed to just one place or the other. Also called the Sahyadri Mountains it is considered one of the world’s ten “Hottest biodiversity hotspot”. The Western Ghats is a host to wildlife sanctuaries, forests, and national parks. The borders of Western Ghats are shared with states like Kerala, Karnataka, Tamil Nadu, and Maharashtra.

This is a UNESCO added to the World heritage site of the Himalayan Railways. It was done way back in 2005. It is called the Mountain Railways of India. The railway was built in 1908 by the British is it believed. But it is a popular way to travel to the hill station of Ooty to Tamil Nadu. If you want to go there, the breathtaking view is certainly picturesque. Do take the time and plan on your way when you want to make a trip worth the while.

Also called Pattadakal, this is the host to the Mallikarjuna temple. It has many monuments but is an architectural marvel in its own right. It is the home to Jain temple and Hindu temples all that bring together architecture from different parts of the country and ideology. It is a beautiful place in the northern part of Karnataka and famous for the things from the 7th and 8th century.

A UNESCO world heritage site near Tamilnadu, Pattadakal is definitely worth a visit. There are many monuments in this area and have a lot of archaeological importance from the Chalukya dynasty. This is also a host of multiple Hindu and Jain temples. It is located in Karnataka and easily accessible, and breathtaking.

The first cave monument for Buddhists, the Ajanta caves are said to have been dated way back in the 1st and 2nd century BC. It is one of those places that is a host to different artistic sculptures and paintings. There are about 30 Buddist cave monuments. If you want to see how people imagined beauty years ago, this is certainly one of those places you must try and visit.

Again a breathtaking beauty is located in the Aurangabad district of Maharashtra. It is believed that the Ellora caves were built way back to the 600 – 1000 CE period. It is a monastery cave that features different kinds of religious sculpture, and art. Ellora Caves features the artwork of Hindu’s Buddhist and Jain work. It is considered one of the largest single monolithic rock excavations.

Considered the ‘City of Cave’ these mesmerizing caves date back to the 2nd century BC. These caves have archaeological remains that are worth multiple visits to understand our rich cultural past. It is full of marvelous caves that have different features of different gods. The carvings and the visions of a people long gone by come to life in the Elephanta Caves.

Built way back in 1878, this structure took over 10 years to build. This is one of the busiest terminals in Mumbai. According to UNESCO, it is based on ‘Victorian Gothic design based on late medieval Italian models’. This is a structure that brings British architecture and Indian craftsmanship and turns out to be a beautiful amalgamation of both the cultures.

15. The Victorian and Art Deco Ensemble of Mumbai, Maharashtra, India

If you are looking for something more recent as opposed to the other places in comparison, this is certainly a place to visit. It has an ensemble that includes things like verandas, balconies, buildings, cinemas, and more. The ensemble is a unique construction done during the 19th and 20th centuries. It shows how modern architecture can also be a marvel to see.

16. Churches and Convents of Goa

Goa is not just known for its beaches, there are places within it considered UNESCO world heritage centers near Tamil Nadu. Do bask in the sun and enjoy the beaches but do not miss out on seeing the different churches and convents that have a great history. These monuments have been built by Portuguese and other influencers. If you want to step back into history, Goa Velha (or Old Goa), is certainly one of those places.

There are many Unesco world heritage sites in Tamilnadu and around the state. What is important to remember is to remember that there are also a lot of adventures that await you when you try to take a trip to Tamil Nadu. Your trip could include historical places in Tamil Nadu. All the places that you go to can give you a special feeling. Some of these can be inspiring. However, they will often help you make or create your own history.

20 Best Places To Visit in Chennai